Tag-Line
COVID-19 forces a father to seek reconciliation for his estranged family.

Log-Line
A COVID-19 death is all the sign that a head of an estranged family needs to bring everyone together for reconciliation. He thinks he is prepared for Pandora’s Box. Is he?

After the death of his brother, RICHARD OREKE decides that it is a sign for him to take up the mantle of leadership and reunite his ‘scattered’ family.

His extended family with his parents and siblings had been riddled with long-standing quarrels that ran too deep to resolve. He reflects on how simple issues had quickly degenerated and became life-long enmity even to death.

He is determined to do whatever it takes to repair his own family unit and bring everyone back together. He is very aware that he doesn’t fully know what this means but he does not care.

He puts out a plea video call and sends it out to his four children. His plea is simple. Come, let us have an honest conversation. Nothing will be off-limits.

Martin de Groot has worked in the Region of Waterloo, Ontario as an avid supporter of the Arts for decades.

In this interview, he shares his insight on the struggles of local artists and how they can be supported to keep the spirit alive.

Tag-Line
A new life, an old story. The silent, the veiled – a shared story.

Log-Line
A young traumatized Nigerian girl must choose between the comfort of her silence or find the strength to start afresh with new alliances in Canada.

This short film takes us into the silent but ‘tale full’ world of ten-year old AGATHA HARUNA; a Nigerian girl who finds herself in Canada having recently been freed from captivity.

Having no clue as to what the young girl’s true identity or origin is and unable to help her, SUSAN CLARK and HENRY CHURCHILL, Agatha’s guardians seek the help of NANNAH RAHMAN – a Nigerian woman with a veil that covers both her face and her past – in the hope of an ethnic connection. But strong-willed and enigmatic Nannah has a personal agenda which not only fuels the tension but unearths an unpleasant revelation.

More Than A Thousand Words Trailer

Event Details: Private screening of the film, talk from Angela Onuora (Writer, Director, and Producer), interaction with the cast, light music (including original score from the film), light refreshments, and a chance to network with members of the KW creative community. 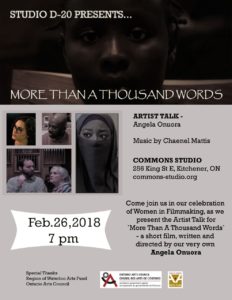 This video was done as part of a class project and ended up with my professor wanting a pair for herself!

Hope you get a pair for yourself too!

April 2016 – Angela appears as a Guest on Alan Quarry’s ‘AQ’s Blog & Grill‘. As a newcomer to Canada, she recounts her interesting journey to Canada from Nigeria and how her new environment has affected her Broadcasting dreams.

February 2014 –  Ever conscious of the artist’s role in positively impacting society, and as part of a public health awareness drive, Angela guest stars in this thought-provoking Nigerian short film – ‘Blood, Bond, and Politics’